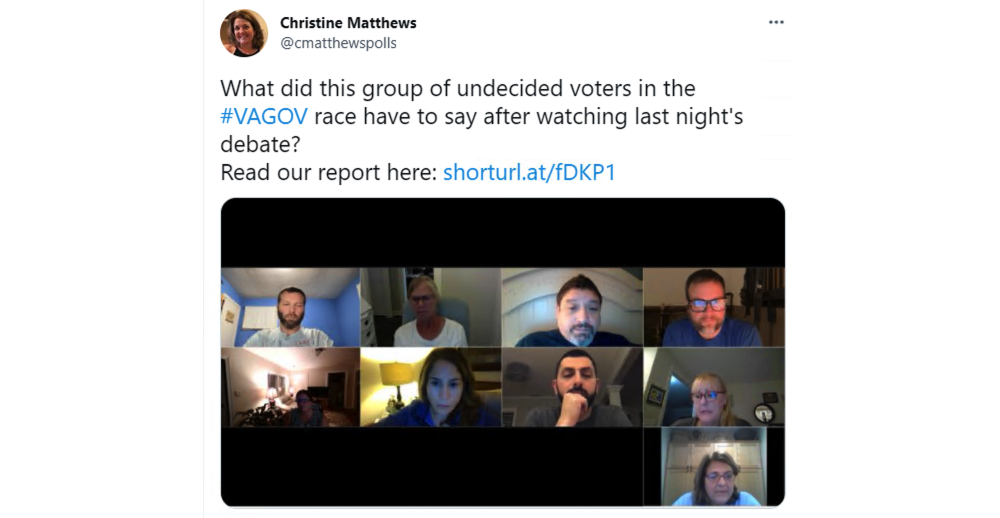 Note: the following release was written and originally published by Bellwether research. Click here to see their original report as shared on Twitter, September 29, 2021.

Virginia gubernatorial debate: How did the candidates do with undecided voters?

Glenn Youngkin didn’t seal the deal with any of these voters.

The negative attacks were a big turn-off.

Generally, they think things in Virginia are going well. One participant disapproved of the job Governor Northam was doing, others “somewhat” approved or were unsure. They cited high vaccination rates and kids being back in school as key reasons for optimism. Their concerns were high taxes and affordable housing.

These voters were critical of Joe Biden, but that wasn’t influencing their decision- making for governor.

Taxes were a key issue for several participants, but they were skeptical of Youngkin’s plan to eliminate the grocery tax.

These voters did not want to talk about the abortion issue.

The exchange on police funding and gun safety left them unsure where the candidates stood.

On education and teachers – they want a balance.

In the immediate post-debate write-ups, there was little coverage of two issues that were important to our voters: affordable housing and climate change.

If you are interested in a link to the video clips or to interview Christine Matthews, President of Bellwether Research, who moderated the groups, please contact: cmatthews@bellwether- research.com and phone: 202-750-1615.

*The recruited voters were undecided or just leaning toward Youngkin or McAuliffe; all were planning to vote. Each identified as “independent,” although most said they tend to vote for either more Republicans or Democrats. Some voted for Joe Biden while others vote for Donald Trump or wrote in a name.

Participants came from Northern Virginia, Richmond and suburbs, Hampton Roads, Tidewater, and western Virginia (Salem). Some voted for Joe Biden while others voted for Donald Trump or wrote in a name.

They participated in a moderated text chat while watching the debate from 7pm – 8pm and a 45-minute video discussion after the debate.