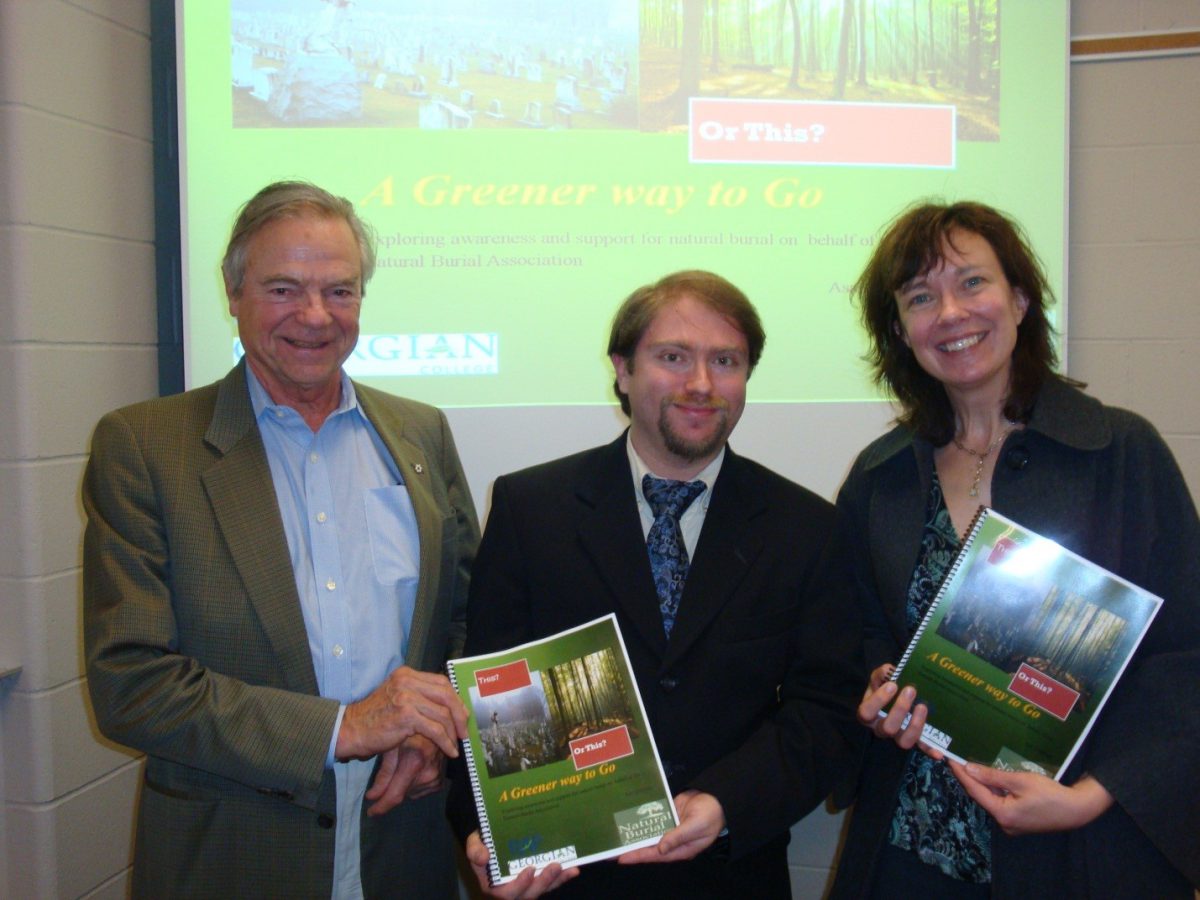 The Natural Burial Association is a not-for-profit organization established in 2005 to promote greener alternatives for burials in Canada. Practices typical of natural burial include avoiding the use of toxic embalming fluids, use of biodegradable shrouds or simple caskets without varnishes or fittings, and creating natural woodland burial grounds without tombstones or manicured landscaping.

While awareness of natural burial in general is not yet widespread in Canada, the practice has gained prominence elsewhere in the world. As Goldman found, natural burial may be the “next big thing” in funerary practice given the increasing environmental concerns associated with traditional burials, cemeteries and cremation practices. England, for example, has established more than 250 natural burial grounds. Goldman recalls, “It was the environmental aspect that initially attracted me to the topic, but as I kept researching and, I guess you could say ‘digging deeper’, the topic and the research became even more fascinating.  I believe there are great possibilities here.”

As part of his research, the Georgian College student conducted a 10 minute online survey with 650 Ontario residents aged 25 years and older, randomly recruited from subscribers of the Canada Talk Now online panel. Access to this sizable sample of participants was made possible through a generous sponsorship by itracks, an award-winning Saskatoon-based company that is known world-wide as a premier creator of software tools for online research (https://www.itracks.com). Goldman also conducted a real-time online focus group with 9 participants, also hosted by itracks.  Goldman notes, “Everyone at itracks was so helpful and they were always ready to help out with technical issues and generally assist in getting this research to their panelists.  As my research topic can be difficult to discuss for some people, the support from itracks was vital to the success of the project.”

Through this two phase approach, Goldman explored such questions as:

Goldman found that while there appears to be readiness for an option such as natural burial, only about 1 in 5 people have any level of awareness that it exists. Despite this overall lack of awareness, nearly half of people surveyed looked favorably upon natural burial in theory, with up to one third of people showing some interest in pursuing the option for themselves. More indicated they would consider natural burial than were aware of the possibility before taking the survey. Younger people, in particular, seemed more open to this option.

Michael de Pencier – member of the Natural Burial Association Board of Directors – said of Goldman’s study, “I thought he made a remarkably good assault on the topic, understood the principles, and made useful conclusions.”

This research has the potential to be of great use to future initiatives of the Natural Burial Association.  “As a pioneering start up organization, with few resources to guide us, the research from Georgian College gave us a good sense of where we fit in.   It was encouraging to learn that we have considerable potential community support” de Pencier added.  “This valuable research will be most helpful in directing our marketing and fundraising.”